By Kanalt-WellPlannedLife August 16, 2015
Why can’t we notebook lovers just stick to something simple, stick to one brand, stick to one system?

Because it’s too much fun to try new things, that’s why.

And I, apparently, am easily swayed.

A few months ago, I wrote about my Traveler’s Notebook.  Simply put, I was using it as a spirituality notebook.  I had three books in the leather cover—one for a church committee, one for a second church committee, and one for motivational quotes and gratitude lists.  It was great having all of these things in one book.

However, I noticed that it was difficult using this notebook as whole, especially when it came to writing in it while it sat on my lap.  I found that the books would shift, moving off of the notebook behind it.  In addition, using the front and/or back notebooks meant that one side was much higher than the other.  Basically, I spent more time fiddling with it than I did actually writing in it.

As much as I loved it, it was distracting.

The reason for this could be that there’s only one band in the cover itself, so I had to attach the first and third notebook with separate bands.  And since the bands are thick, that added to the problem.  I tried different ways of attaching the notebooks to each other, all with the same result, some worse than the first.  I tried removing a notebook, then two.  But the cover is just too big to look right with only one notebook.

So while I was trying to decide what to do, somehow, for some reason, I thought to try a Moleskine.  I have known about these notebooks for some time, and while I’ve always been attracted to them, I never tried them.

For my birthday, as friend gave me a gift card to Barnes & Noble, a store I knew had Moleskines, so I decided to give one a whirl.

Let me just say that I went from buying one to try to owning six of them, all within a matter of a few weeks.  I love them.  I feel so studious, smart, and in-the-know with them, a member of an elite club.  (This, of course, is all in my mind.  But I digress.)

So, how am I using them? 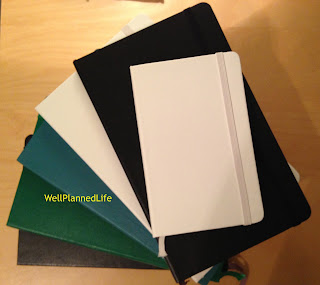 I have a hardcover ruled white notebook that lives at work, which will go to and keep notes for committee meetings.

I also have a hardcover ruled green notebook that now serves as my health notebook.

I have a hardcover quadrille black notebook that I use for all church items—meeting notes, general notes, and projects.

I also have a softcover version of the black that I use for my inspirational quotes and gratitude lists.

A teal softcover ruled notebook is currently serving as a backup notebook for when I run out of room in any of the others.  However, I’m considering putting that to use as well, but I’m still mulling over my idea for how.

All of the above mentioned notebooks are the large size, perfect for taking ample notes and an array of lists.

Finally, I have a small (pocket) version of the hardcover white notebook for a project I’m working on, one that I’m not yet ready to share.  (But look for details here for when I am.)

I have to say that these notebooks are working out quite well!  However, when one has so many notebooks in use, one needs a good storage solution.

Enter the Thirty-One Double Duty Caddy.  With a pocket on either side of the handle and 4 small mesh pockets on the sides, this is the perfect place for all of my notebooks. 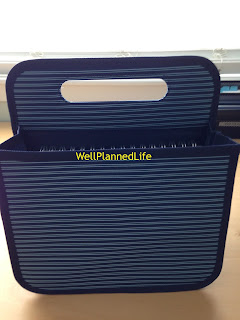 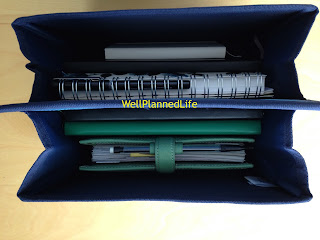 When I need more than one of these notebooks, I just grab the entire thing and go.  Or, I can swap out what I don’t need for what I do and grab-and-go from there.

I do sort of miss having some of these subjects in one book—anything spiritual-related (church, gratitude lists, motivational quotes) could really live together in one place.  And I do still think about moving back in that direction.  I’d be lying if I said that I was not (very) intrigued by the new Van der Spek Nomad notebook covers.  I am especially curious to know if the fact that it has more than one band would make the three notebooks function better as far as writing surface goes.  But unfortunately, at least for right now, my budget does not allow for this purchase.  Perhaps one day.  Then, I could rethink where my spirituality lists live.

In the meantime, the Moleskine notebooks work wonderfully.

I will detail the use of each one in separate posts in the near future.

*Disclaimer: I am in no way affiliated with or getting kickbacks from any of the companies mentioned.  I am merely a happy customer.  All opinions are my own.
Notebook Love Organization