Introducing [Name Withheld… for the Moment]

By Kanalt-WellPlannedLife September 08, 2013
You know Reggie, Ms. Plum, and, most recently, Gypsy.  (I also have Beauford, but he’s special, and not a member of the core group.)  I now have the last member of my compact binder collection. 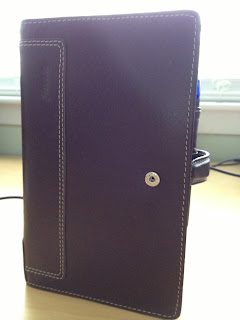 First, I want to thank reader Mstraat for selling me her Compact Holborn.  I had originally purchased the Holborn from Pens and Leather, but had to return it due to faulty rings.  I emailed the company to see if I could exchange the binder for one without a ring issue, and they were so great about it—they have a time frame for which returns will be accepted.  I was late due to the blizzard we had, but they made an exception and accepted it late.  Not only did I have the email confirmation of a replacement binder being sent, but I also typed a letter requesting one and stuck it in with the return.

A few weeks went by with no new binder.  I emailed.  I called and left a message (because it would appear that they never answer their phones).  I emailed again.  Finally, I sent a “nasty” email (nasty for me, which isn’t very nasty at all).  In the end I never received a replacement because they processed it as a return only.  The mistake isn’t what bothered me—what did bother me was that no one could be bothered to tell me what the deal was, even after several attempts to get an answer.  I’ve never had a problem with P&L before, but I’ll be honest and say that I’m leery of ordering from them again.  Bad customer service is something I just can’t tolerate, probably because I am in the customer service business, and if I ignored our patrons that way, my job would be on the line.  I would have to be darn sure that what I was ordering from them is something I would definitely keep.  But with Filofax quality being the way it has lately, I’m not sure I want to take that chance.

Anyway, I happened to mention my dilemma on a Philofaxy post, and Mstraat was kind enough to offer me her Holborn.  I immediately accepted.

Not only did she send the Holborn, but she also included some lovely notepaper from France and a personalized note. 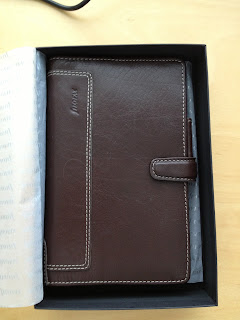 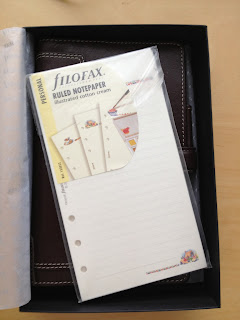 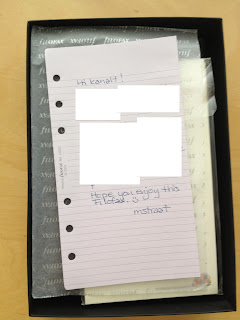 I’m sure everyone is familiar with the Holborn’s layout and specifications by now, so I won’t go into that.  I will, however, show you some pictures of mine in use. 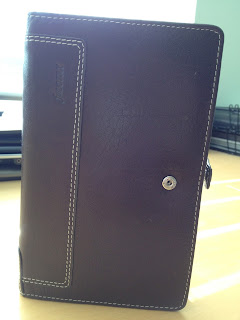 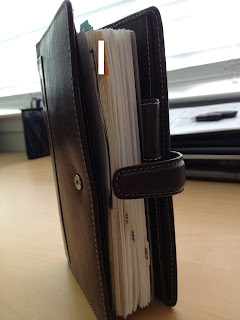 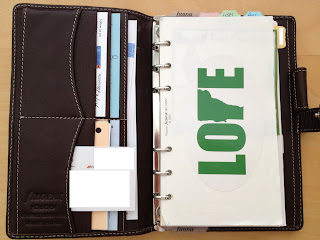 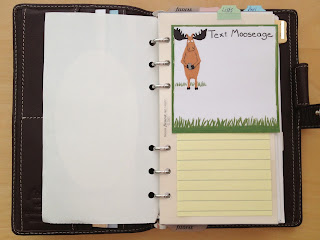 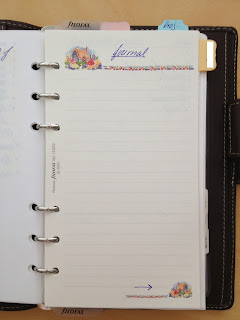 I am using the notepaper Mstraat sent to keep a running list of journal topics in my planner (obviously this is a new sheet).  I don’t get the chance to write everyday, but if something comes up that I want to write about, I don’t want to forget it.  I then refer to this list when I have time to write. 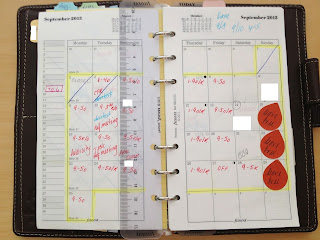 Here is how September is shaping up.  I have been using the Martha Stewart teardrop labels to remind me of when to (try my best to) keep my schedule clear.  For the most part, this has been working.  But obviously, some plans are out of my control. 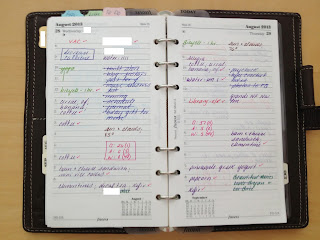 Here is a typical two-day spread.  My appointments are on the left, and to-dos are on the right.  I’ve been keeping track of my exercise and meals for help me with my health journey.  (It is going very slowly due to a number of life events, but I am losing—update forthcoming.) 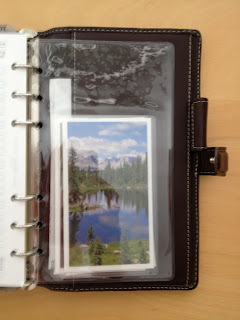 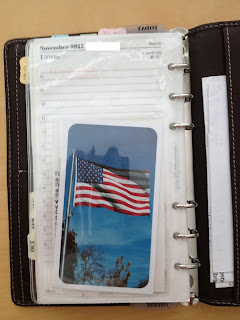 At the back I have funeral cards for my dad, and most recently, for my uncle. 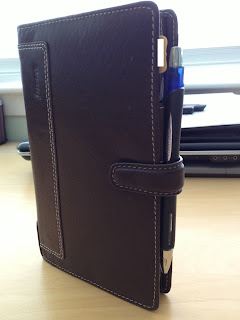 Here he is, all buttoned up and ready to serve.

So what have I named him?  Well, it took a while to decide.  Back in February, shortly after receiving the first Holborn, I had a back and forth discussion with Zoe on some options.  It’s funnier (at least to us) to read our discussion, so with her permission, I am posting the pertinent conversation here:

Kanalt:  Names for the Holborn -- I haven't decided on anything yet but it needs to be something rustic and somewhat western, like Bub or Bubba or Wayne.  But none of those work well.  Clint perhaps?  But that just makes me think of female body parts, and I don't know that I want to go there with my planner.  Got any ideas?

Zoe:  Clint, lol!! I like Bubba, but whenever I hear that name I think of the movie Bubba Ho-tep. Not a bad thing...just not really planner-ish.  Funny, I don't think of the Holborn as being rustic/western, really.  Maybe because I have the black one? Black = of course city slicker ; )  Because it's Holborn all I can think of is Hal (as in, Hal Holbrook...which has nothing to do with HolBORN, lol!) And Hal isn't very rustic...more Sci Fi ("Open the pod bay doors please Hal...") This is making me want to go home and move into my black Holborn, lol!  Who I might have to name Hal now!! Um....rustic names...right. Hank, Zeke (I kinda like Zeke...), Ezra, Butch, Sundance (lol!), Cote, Tex, Carson, Dallas (kinda sexy...), Bronson (also kinda sexy...), Remington (yet another sexy name...I must be horny or something!), Shane? I think my favorite out of that list is Bronson.  Rowr!!

Kanalt:  LMAO!  Yes, you need a cold shower.  All of that over planner names, mind.  Ha ha!  So, of those: Hal, mmm, not my favorite, especially because we have a town called Holbrook here and I don't want to name any of my planners after a Long Island town.  but you should totally use it for your city slicker black one.  (And I think it's the color that makes me think Western, not so much the binder itself.)  Although Bubba could be considered western, it makes me think more of a redneck, hill billy with no teeth.  So I think I'll pass on that one.  Zeke is cool, though the last name of someone I know, so probably not that for that reason.  (Although I also know someone named Reggie and that didn't stop me from using it, but I haven't seen him in years and probably never will again -- they moved across the country.)  Tex and Dallas are cool, but very... Texas.  Shane, maybe, but it makes me think of Shania Twain and I don't like her.  So I'm down to Bronson or Remington, both of which make me think of something like the Marlboro man (minus the cigarettes) wearing a cowboy hat, toting a lasso, and smelling so deliciously yummy and manly (because of the cologne).  Which also brings me to Stetson.  Both a hat and a cologne.  What do you think?  BTW - I'm totally keeping this email to use as fodder for my blog post...

Zoe: ROFLMAO! How fun was this?? Ok, so my black guy is now officially Hal. Done. Now, between Bronson, Remington and Stetson, my vote goes to Bronson.  Stetson calls to mind a hat not a planner...that leaves Remington and Bronson. And Remington is also a rifle...so I like Bronson. Plus, that one is the most (to me) unabashedly sexy ; )

Kanalt: Hmm, plus, Remington makes me think of a razor, and while my planner might be "cutting edge," (ha ha) he's more of a traditional man's man (insert grunt here).  So Bronson and Stetson.  I do like Stetson better, but you have a very valid point about it being a hat more than a planner.  So Bronson it is.  (Though I'll try not to think about the dweebie guy from “Perfect Strangers” -- Balki versus Cousin Larry.)

So Bronson it is.
Planners