By Kanalt-WellPlannedLife May 23, 2012
Reggie and I (and my hubby) just spent an extended weekend in San Antonio, Texas visiting family—we stayed with my sister- and brother-in-law.  We all had a great time.  I don’t know why it has taken us so long to get there, but we sure won’t wait so long to go back.  It was my first time there (and Reggie’s).  We were amazed at how friendly and welcoming the people are.  In general, people are patient and relaxed, very unlike many people here in New York who are always in a rush to get nowhere and have no problem letting you know they’re unhappy with whatever it is you’re doing (or not doing).  In Texas, it’s just a calmer pace, much more my speed.  The weather was warm and the sun was shining.  While I can’t say I’m ready to move there just yet, I see the appeal of living there.  I’m more of a mountain girl myself and need to have my official four seasons, at least at this point in my life.  But never say never—Texas is not out of the running for a possible move, way down the line.  (But that’s just my opinion.  I should talk to my hubby about the possibility too.)

So what did we do?  I will let Reggie’s pictures tell most of the story, though his story involves my story.

The first day we had a lovely lunch with my cousin who lives just under two hours away from my in-laws.  She and her husband drove down to see us.  In the evening, we went downtown where we visited the Alamo (we didn’t go inside as it was closed by the time we got there) and the Riverwalk.

The second day was the most fun—we went shooting! 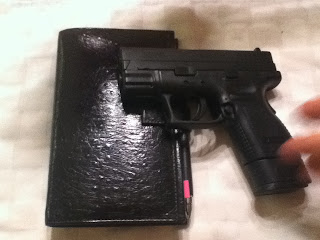 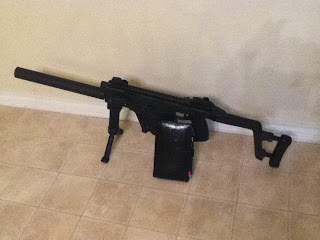 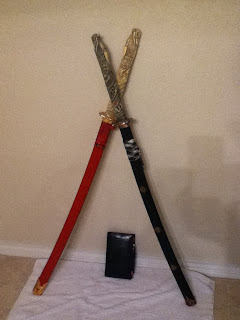 When it came down to it, Reggie was a little nervous to pull the trigger.  So I stepped up to the plate.

Reggie had good reason to be nervous—I found myself in a fluke situation.  A hot bullet shell landed between the arm of my glasses and my temple, burning me a little (the damage was done by the time I realized how hot it actually was).

After a morning of shooting and an afternoon of relaxing at the movies, we sat down to some down-home southern BBQ.

I did find Reggie is a comprising position after dinner:

The third day we spent shopping.  I hemmed and hawed at buying a pair of cowboy (girl) boots.  In the end, I did not buy them, but to hell with it!  I’m buying them for me for my upcoming birthday.  I’ve always wanted a pair, and damn it, I shall have them for when we return to Texas.

One store we did visit was The Container Store.  While I could have bought a great many things, I came out with only one item—stickers for Reggie! 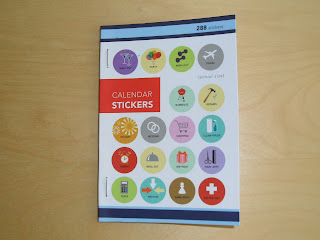 This little booklet has a total of 288 stickers, all meant to be used on a calendar.  The book includes the following stickers:

There are even sticky strips on the back cover so that you can stick the entire book to your planner! 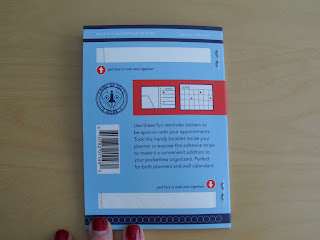 Obviously, some stickers will be used more than others.  And maybe, just maybe, they’ll come out with different stickers at some point too.  Who knows?

Reggie was so excited that I found these accessories for him, he begged me to get another pack to use as a reader giveaway.  I complied.

If you are interested in winning these stickers, leave me a comment below (for those of you with WordPress accounts and who have been having trouble commenting on Blogger, shoot me an email [kanalt17 AT gmail dot Com] and I will post it for you in order of receipt).  You can comment until 11:59 p.m. on June 1 (New York time).  On June 2, I will randomly pick a winner via a random number generator.  The giveaway is open to all readers, worldwide.  I will announce the winner on the blog (as a new post) on June 2.

NOTE: I am in no way affiliated with or getting kickbacks from The Container Store or Girl of All Work, the manufacturer of these stickers—I simply think they are fun and am giving them away as a thank you to my readers.

Reggie and I wish you luck!

With that, our weekend sadly came to a close.  We were a little depressed to leave San Antonio and our family members.  But hopefully it won’t be long until we return (with boots on feet!).  After such an eventful weekend, Reggie must rest up for the upcoming New York City Philofaxy meet up (three spots are still available—contact me if you’re interested).
On Location Travel