Thinning Out the Herd

By Kanalt-WellPlannedLife March 31, 2012
I love my new tabs.  They bring an element of fun and personalization to some drab tabs.  However, they do contribute to a much fatter binder.  And while I said I didn’t care, I started to.  I was having trouble turning the pages without issue—they would not turn without a little coaxing.  And because the paper wasn’t glued at the very edge, my finger was catching the edge of the paper every time I opened to a specific tab.  So with a tear in my eye, I accepted what was—I had to move my personalized tabs to my household Malden.

I use the Malden fairly often, so I’m still able to enjoy my decorated tabs.  But I don’t see them all of the time, so I’m a little disappointed.  But since the Compact is limited on space to begin with, removing the tabs from Reggie helped to thin him out.  He was getting a little chunky and proving to be difficult in some situations.  Now he is once again thin and easy to manipulate.

My only issue with my fancy tabs in the Malden is that now the paper does not exactly match the section it represents.  I like my sections in a specific layout. 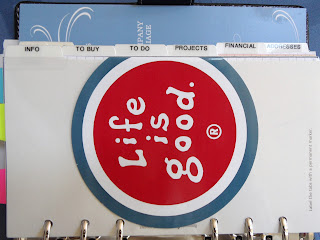 The addresses are at the back so that the letter tabs don’t cover the rest of the tabs.  The information section is in the front since it’s mainly used for reference and I don’t write in it often, thus eliminating the rings-getting-in-the-way-of-writing scenario.  The rest of the tabs are in the middle for ease of writing without the rings getting in the way.

Unless I wanted to peel the paper off of the tabs and risk tearing it, I have to live with the paper and tabs being in the layout they are currently in.  So I just made new tab titles with my label maker.

The changes:
My OCD tendencies are a little irked with this set up, but I’m trying to move away from striving for perfection with such mundane issues (mundane only in the grand scheme of things, not in the planner world).  So I’m leaving the tabs as they are for now.  I may change them to be more “perfect” at some point, but for now, they’ll do.  The point, of course, is that I can still enjoy the fruits of my creative labor, even if it means that the fruit stays home.

In other Filo news, I’m still working on my Health binder and updating my Happiness binder (I feel like I’ll never have time to finish these small projects—someday I will!).  Also, I’m craving another compact binder.  I love the Regency but I’m craving color.  I have thought about the Osterly in wine and/or the Slimline Holborn (which is not a compact—it’s rings are slightly smaller than a compact and I’m not sure I can go any smaller than what I’ve got, so we’ll see) in brown.  I’m hoping the new compact line will be revealed soon so I can make an informed decision without overspending (is such a thing even possible?).